Eagle Beach — The members of the Aruba Timeshare Association, convened for their monthly lunch meeting at La Cabana Beach Resort & Casino with representatives of most of the island’s Vacation Ownership properties, and a number of strategic partners in attendance.

ATSA President Ursell Arends welcomed members and visitors / presenters just before officially opening the meeting with the approval of minutes from the meeting held May 24th, 2018.

In his welcome address he also informed the forum that the ATSA’s Board decided not to go ahead with the consideration to allow for condo developments to become members of ATSA.

Retired hotelier Jan Van Nes was unanimously accepted into the organization as its first honorary life-time member in recognition for his tireless work for Tourism in general and ATSA in particular.

Local writer and winner of two travel writer awards from the Caribbean Tourism Organization, Tina Causey-Bislick, and local visual artist and illustrator Vanessa Paulina, whose work has been featured in exhibitions throughout the Caribbean, the United States, South America, Europe and Africa, gave a short presentation about their project where they teamed up to produce a locally-inspired children’s book titled “The Search for Streya.” The colorfully illustrated book follows Jasmira and her younger brother, Joey, who are on a quest to finally get their first glimpse of Streya, the mystical sea turtle that their grandfather rescued from a fishing net many years previously. The book which teaches kids about conservation and about the sacred bond between people and animals, was very well received by the members of the Association.

CEDE Aruba, Daniel Tecklenborg and Bryan Krozendijk elaborated on an upcoming business case they have been busy developing under the title “Happy Community Initiative.” The initiative addressing local social challenges by fundraising in eight (8) of ATSA’s Resorts was enthusiastically received and CEDE Aruba will continue developing the project which will hopefully come to fruition in December 2018.

The membership has also been informed about a Salary and Benefits benchmark 2018 the results of which will be published in the near future.

Information about the upcoming Interval International Info-Exchange Seminar, was on the agenda. The event will be taking place on September 25th, 2018, at the Hyatt Regency, Aruba. This one-day complimentary event presents a good opportunity for General Managers/ Owner Service and/or Reservation Managers, Sales/Marketing Executives and other employees who interact with Interval International and timeshare owners to learn about all of Interval’s products, support programs, and services.

At the same exact time, the Shared Ownership Investment Conference will unfold, September 25th to 27th, also at the Hyatt Regency Aruba. This will be the 20th annual Shared Ownership Investment Conference and the Resort Executives and their Board members are invited to attend and meet with lenders, bankers, developers and other investors participating in or interested in, this sector.

Last agenda item before the free word announced that vacancies and job opportunities will be displayed on the ASTA website. http://www.arubatsa.com/

During Freeword, all the hoteliers expressed their satisfaction with the occupancy of their properties in the off season in Aruba and reported gearing up for a busy summer family vacation season.

Hotelier Joe Najjar reported that almost 3.5 million florins will be spent by the Tourism Product Enhancement Fund, on a variety of projects from more trash cans on beaches to buoy in swim zones, and permanent anchors in snorkeling sites.

Casa Del Mar will be refinishing its building exterior with $8 million earmarked for the project. Plans for the interior of the rooms are being considered for next year.

Playa Linda is in the last phase of renovations which started in 2011. The Resort reported satisfaction with the beach rehabilitation project to date.

The Caribbean Palm Village Resort informed about an in house, ongoing solar panel project, while the Tropicana Resort continues its slow but steady redesign and upgrade.

The Marriott Ocean Club revealed a $32 million investment, in a total new look and feel, in a modernized and comfortable Caribbean style in the lobby and villas.

Jurgen van Schaijk of Amsterdam Manor expressed his concern over Eagle Beach maintenance with 600 cruise-ship visitors delivered to its shores a number of times a week without proper monitoring and supervision.

Costa Linda Beach Resort is in the midst of upgrading its furniture and conveyed that its recently-constructed Frangipani Suites are fully finished and fully booked.

The Aruba Beach Club with 6.5 million florin saved for renovations was please to begin the process shortly.

Paradise Beach Villas related redoing its public bathrooms and, with the Ministerial approval, was gearing for paving the street and sidewalk at the North of the Resort.

La Quinta, celebrating 30 years, shared extensive plans for remodeling and upgrading everything from logo to lobby and rebranding the property after three decades, around the conservation theme. Each room, will be named after a local bird and in general, the Resort will become a more environmental friendly organization.

Hotelier Andy Osbourne asked Resorts to contact him if they are interested in sharing the joint purchase of environmentally-friendly food and beverage products which becomes law on the island in the near future. 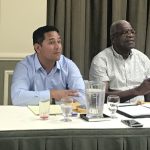 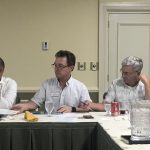 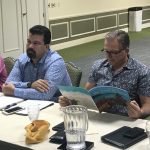 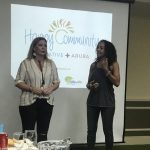