ATSA reports on its General Monthly Meeting for April 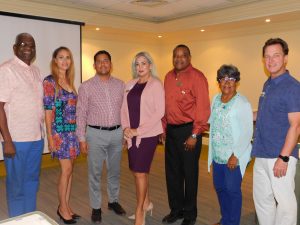 Eagle Beach — The members of the Aruba Timeshare Association, enjoyed their monthly lunch-meeting at La Cabana Beach Resort & Casino with representatives of most of the island’s Vacation Ownership properties, and a number of strategic partners in attendance.
ATSA President Ursell Arends then shared the association’s key priorities for 2018, as presented to the Prime Minister of Aruba, Evelyn Wever-Croes in a recent meeting, He reiterated that ATSA’s goal is to positively contribute to the Aruban economy and dedicate efforts to effectively influence the entire community.
As the voice of Aruba ‘s Vacation Ownership industry ATSA compiled a list of key issues highlighting top challenges and providing alternative solutions to help resolve them.
Among Key Priorities discussed with the members of cabinet, the Beach Policy implementation; the revision of the status of all existing approved commitments for every category of accommodations, and the critical need to create a master plan; the increased difficulty in obtaining work permits for skilled staff; the negative impact of increased criminal activity; the need to introduce an environmental levy for cruise tourism; the introduction of incentives for hotels to continue upgrading; the implementation of a promise of financial relief to hotels in the form of a tax reduction for renovation materials; the billing of consumed electricity rather than installed capacity, and the role of ATA as a marketing organization without deviation of its primary aim.
High on the list of key priorities is the business environment of the island, AOV reform, Health Insurance Reform and Fiscal Reform. ATSA proposed a number of ways of reducing the cost of doing business, reduce employee absenteeism, and promote a special tax rate, a bonus, based on performance and increased productivity.
ATSA members then expressed the desire to see GOA inventory challenges and solutions, in an open forum, perhaps in the social dialogue format, which could become a fruitful round-table discussion.
The association members also agreed to investigate the proposed changes in their Articles of Association, a bit further. As published previously, the proposed changes in the Articles of Association would allow ATSA to grow by inviting condo projects in. The current Board and members are still reviewing all the options with regard to the inclusion of condominiums into the ATSA membership.
It was noted in the meeting that while ATSA & AHATA serve two different segments of the market, they still have many areas of mutual concern such as the beach policy, taxation, and labor issue, and should enhance the level of collaboration.
Towards the end of the meeting, Treasurer Freddy Albertus gave a financial overview, and President Arends reported that with the support of CEDE Aruba and MGM Source,; ATA will be running a survey among timeshare members on their data base, regarding charity projects they would be interested to support.
In the free word session, Joe Najjar reported on the activities of the Tourism Product Enhancement Fund: An order of 40 larger trash cans in on the way, to be placed in popular locations and the restoration of the 27-electric poles leading to the California lighthouse. Najjar also reported TPEF contributed generously to the creation of a Birdlife Conservation Foundation website. The fund has solicited designs from five local architectural companies for a modest version of a Green Corridor at Malmok and lent its support to a few local foundations such as Stimami-Sterilizami and Atelier 87. Najjar was proud to announce that the archeological museum received a much-needed donation toward new air-conditioning units, and the repair of its ceiling
Special guest Mr Martis from Aruba Crib Rental made a presentation regarding the outsourcing of baby and toddler equipment for visitors staying on Vacation Rentals.
President Arends thanked La Cabana culinary team for hosting a perfect event including a sumptuous health-conscious lunch.